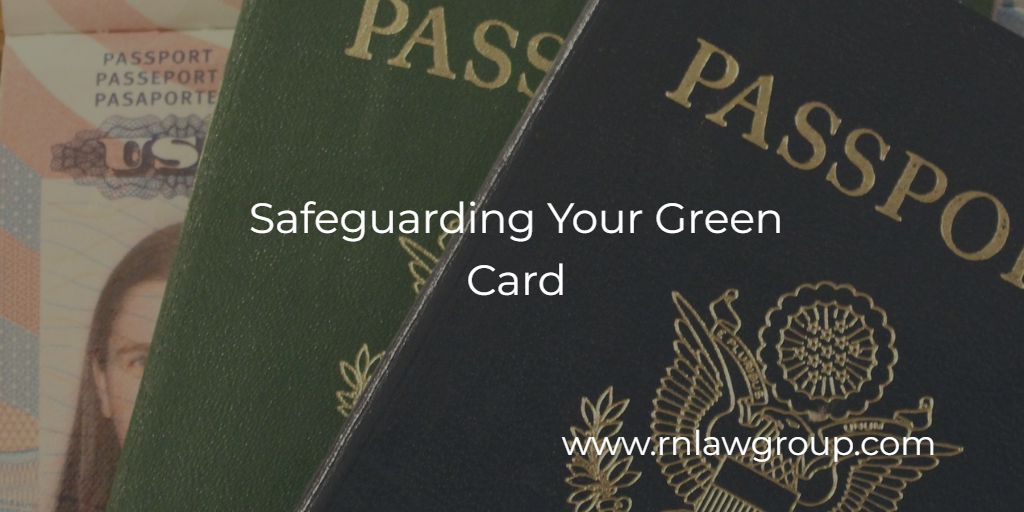 For many, the process of obtaining lawful permanent resident (“green
card”) status can be a complex and challenging effort. Having a green
card can provide certainty and peace of mind that you can live and
work permanently in the United States. However, your permanent
resident status can be revoked under certain scenarios. This flyer
covers potential acts that could cause you to lose your green card.

Acts That Could Make You Removable (Deportable)

Committing certain crimes can have devastating consequences for
permanent residents, including the loss of a green card and
deportation. Drug offenses (including marijuana), domestic violence
crimes, firearms offenses, and other crimes involving “moral
turpitude” (a general term to describe acts that are morally
reprehensible and intrinsically wrong) are a few examples of crimes
that could make you deportable. It is critical that you speak with an
attorney before admitting guilt to any crime and seek the advice of an
immigration attorney to understand how an arrest will affect your
immigration status before the criminal case is completed.

Falsely Claiming to Be a U.S. Citizen

Noncitizens, including permanent residents, who claim to be U.S.
citizens, whether in writing or not, are subject to removal from the
United States. A false claim to U.S. citizenship is a serious
violation of law and can have extreme and devastating immigration
consequences. Waivers of this ground of removability are rarely if
ever, granted.

Lengthy Absences from the United States

Green card holders who remain outside of the United States for long
periods of time risk a determination that they have abandoned their
permanent resident status. In general, trips outside the United States
for less than six months are permitted. A trip of six months to one
year may trigger increased scrutiny at the border, and the permanent
resident should have a reasonable explanation for the lengthy trip.
Trips of one year or more will likely result in a determination that
you have abandoned your permanent resident status unless you have
obtained pre-approval for the extended absence through a document
known as a re-entry permit.

If you believe that one or more of the situations outlined above might
apply to you, we encourage you to contact our office at
info@rnlawgroup.com Rahul Reddy is the founding partner of Reddy & Neumann PC. He founded our firm in 1997 and has over 23 years practicing employment-based immigration. Rahul‘s vast knowledge of the complex immigration system renders him an invaluable resource and an expert in the field. His personal experience with the immigration system has made him empathetic to each of his client’s cases and empowers him to help others achieve the American Dream.