Blog The Effect of a Foreign Office Closure on L-1 Employees in the U.S. 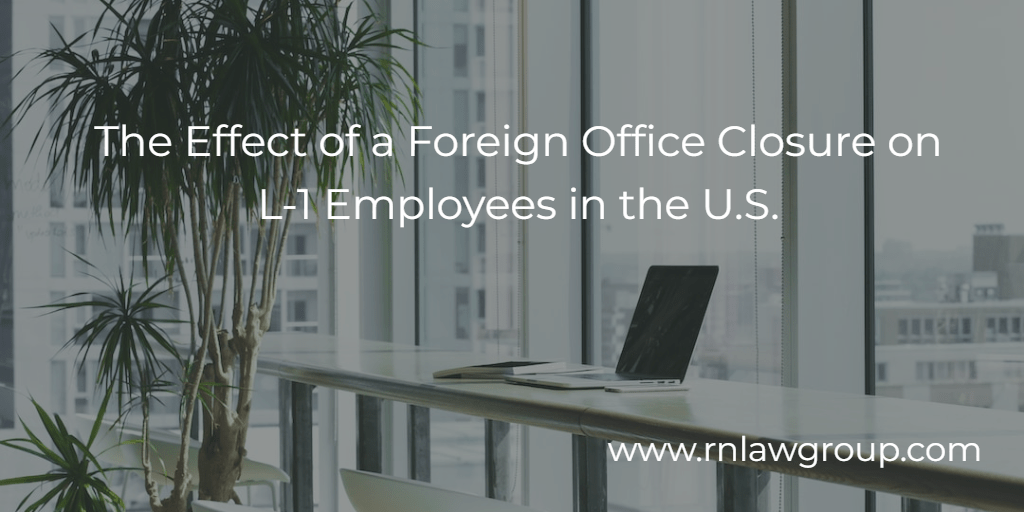 The Effect of a Foreign Office Closure on L-1 Employees in the U.S.

L-1 employees working in the U.S. for a multinational organization qualify for the L-1 visa on the basis of their prior employment with a company abroad that possesses a “qualifying relationship” (affiliate, branch, parent, or subsidiary) with the U.S. petitioning employer. However, after the visa has been issued and the beneficiary has transferred to and is working in the U.S. in L-1 status, what happens if the foreign company with which they were employed closes down, or is merged into another entity?

L-1 employees can maintain their status if the U.S. petitioner continues to qualify as part of a multinational organization, i.e., if it continuously maintains a qualifying relationship with another foreign company. The L-1 employee may therefore be able to continue their U.S. employment after the closure of their foreign employer, if at least one foreign affiliate, branch, parent, or subsidiary of the U.S. employer continues to exist, and as long as they continue to work in the managerial, executive, or specialized knowledge capacity described in the approved I-129 petition. This is the case even if that existing foreign company never employed the L-1 beneficiary, and is not located in the country where the L-1 beneficiary was previously based. Upon filing the I-129 petition to extend the L-1 employee’s status, the U.S. petitioner would explain the closure of the foreign employer and provide documentation of the company’s continued qualifying relationship with other foreign entities.

However, if the U.S. employer does not have a qualifying corporate relationship with any other company abroad after the closure of the beneficiary’s foreign employer, the L-1 status would no longer be valid. This is due to the requirement that there always be a foreign qualifying entity to which the beneficiary could be transferred after the completion of their 5- or 7-year L-1 term in the U.S.

While it is not required that the foreign employer continue to operate in order for the L-1 nonimmigrant status to continue, the same is not true for immigrant petitions filed in the EB-1C (multinational manager or executive) category. In order to qualify for EB-1C classification, the foreign employer of the beneficiary must be in existence and actively operating from the time the I-140 immigrant petition is filed, until it is adjudicated. If the foreign employer has closed down or ceased operations, the only way an EB-1C petition can still be filed and approved is if another foreign entity qualifies as the “successor-in-interest” to the former foreign employer, and continues to operate from the petition’s filing through adjudication. Therefore, if the original employer has been merged into or acquired by another foreign entity that qualifies as a successor (defined as a corporation that, through amalgamation, consolidation, or other assumption of interests, is vested with the rights and duties of an earlier corporation), the qualifying relationship for EB-1C purposes may be established and the I-140 petition could be processed.

The closure or merger of an intracompany transferee’s former foreign employer can therefore have significant impacts on their L-1 nonimmigrant status, as well as the company’s potential plans to sponsor them for permanent residency in the EB-1C category. If there is a possibility that an L-1 employee’s foreign employer will close, the U.S. sponsoring company is encouraged to consult with an immigration attorney prior to the closure or merger, in order to determine the consequences of the changed corporate relationship and to make necessary arrangements.